On the 23rd of October, the marketing team at KQ Liverpool attended an insightful city stakeholder event hosted by the Liverpool City Council. It took place in the stunning Cunard building, which Mayor of Liverpool, Joe Anderson, was quick to compliment in terms of its South African rosewood interior and its history in the maritime industry.

Radio host for BBC Merseyside Ngunan Adamu kicked off the event, talking of her Nigerian roots and the warm welcome her family received from the local community upon relocating to Liverpool. Despite her hopeful tone and praise of the city, she mentioned an overall 60% decrease in the Liverpool City Council’s (LCC) budget, and an exponential increase of 50% in the number of children entering into social care. She then introduced the next speaker, Mayor Joe Anderson, whose powerful words enabled us to grasp the enormity of the task at hand, but the encouragement and motivation needed for our city to prosper.

To put things into context, he told of how ever since his childhood and throughout his life, the general public have blamed the council for their problems, with the assumption that their council tax contributions should foot the bill for everything going on in the city. Surprisingly however, even though the city collects an estimated £175 million a year in council tax, that is soon overshadowed by the cost of adult social care (£162 million) and child social support (£68 million) which equates to a combined figure of roughly a quarter of a billion. He talked of the real dilemma we face, where we are dealt with increasing austerity, and yet are expected to yield improved results with less resources and facilities at our disposal. In his own words he said that we must “realign things to make a difference, and this is the challenge, not just for the council but for the city as a whole”.

1/3 of children in Liverpool sadly do not look forward to Christmas, with the council also providing over 30,000 meals during the school holidays. Mayor Anderson said that this should not be happening in the 5thrichest country in the world and put a big emphasis on youth engagement as the way forward for the city. He explained that there is an “exciting buzz” around investing in Liverpool, and left us with some inspiration, saying that we would not “take our foot off the accelerator, to keep leading, keep offering opportunity and continue to give hope to young people across the city region”.

The next speaker was Professor Michael Parkinson, who shined a positive light on the city, detailing his years of service to Liverpool, and how he was watched the city go through hard times, but is now excited and ambitious by the growth that is taking place. He noticed a shift in mentality going into the 21st century, as the regeneration was what the city needed, to give a sense of direction and a source of hope for the local population to feed off, demonstrating that we are essentially all in this together, with everyone able to pay a role in putting Liverpool on the map. He also said that we have “got to do more upstream rather than firefighting. This is an opportunity to do things differently. We need to go beyond the what and why to the who and when”.

The final speaker of the event was the Chief Executive of the LCC, Tony Reeves. Tony Reeves added a strategic angle to the discussion, which complemented the previous speakers, and was a fitting way to end the event, with a plan and sense of direction and motivation in the minds of attendees. He put a big emphasis on the ‘city plan’, pushing for collaboration among partners toward the common goal of improving the quality of life in the city. He stressed integrated leadership and accountability, which would help in delivering a single narrative to the government and for joint decisions to be made across the Liverpool City Region.

In summary, it was a realistic assessment of where we are as a city right now. There was no hiding from the statistics that need addressing in terms of the poverty gap, and infant mortality, however there is a clear direction in which the city is focused on going. The speakers were not short of praise for the growth that has already taken place here, and their inspirational words assured us that the only way is up for the Liverpool City Region. 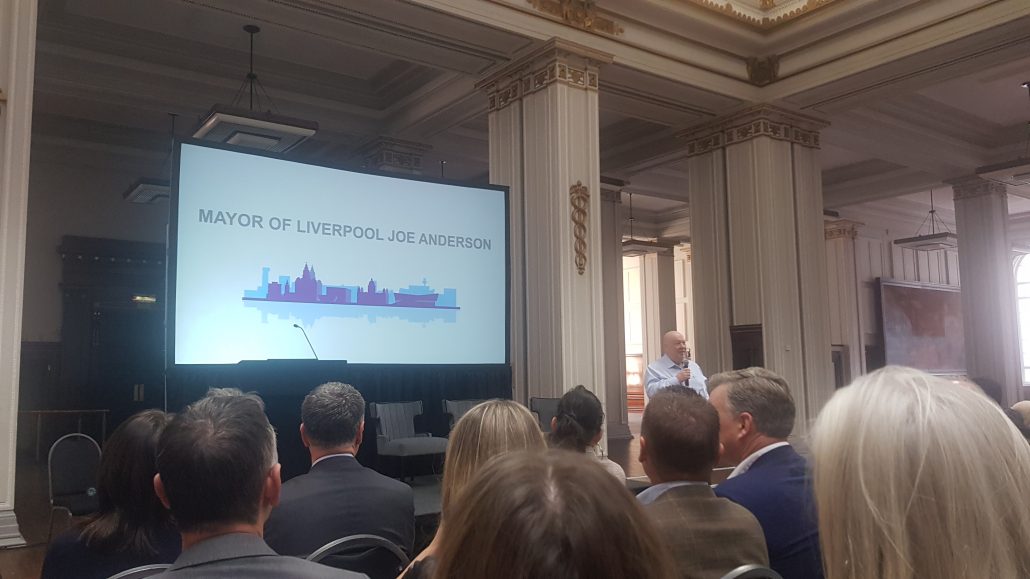