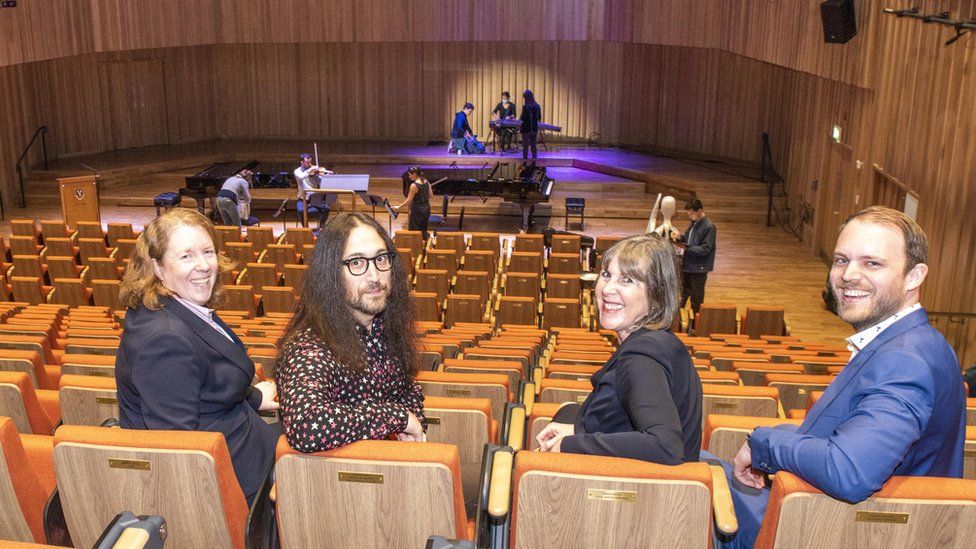 The opening of the new state-of the-art cultural landmark, on the corner of Grove Street and Oxford Street, was celebrated with the world premiere performance of composer and Liverpool alumna, Professor Shirley J. Thompson OBE’s One World – a re-imagining and homage to John Lennon’s iconic song, Imagine.

“Liverpool has become part of me from years of going there, and with this new centre part of me will always be there – for that I’m very thankful. I think John is smiling about it too. I’m also very thankful that our son, Sean is there in Liverpool for the celebrations around the opening.”

“They used to say behind every great man was a great woman. But my parents famously stood beside each other as equals.

“It is a beautiful statement that the University of Liverpool would recognize my mother in this way.

“In a city synonymous with my father’s achievements it is especially meaningful to acknowledge Yoko Ono for the remarkable human being that she is.

“Due to its cutting edge design, The Tung Auditorium is possibly the finest concert hall in the world.

“The excellent acoustics will bring out the very best creativity in anyone who uses it, from students, tutors, youth groups, and amateur ensembles, to internationally acclaimed visiting artists.”

“We are very proud of what the Yoko Ono Lennon Centre offers not only the University, but also the city and region.

“As well as offering a busy programme of public performance, our students will benefit from involvement in all aspects of The Tung Auditorium’s operation, from front of house to sound technician roles, delivering so much valuable experience as they look towards their careers.”

“We always look back fondly on our time as students at the University and are proud that The Tung Auditorium will support the ambitions and aspirations of the next generation of students.

“We are delighted to be involved in the creation of a new cultural, artistic and educational establishment, one that further celebrates the long-standing relationship between the Tung family and the University.”

As well as the performance space and teaching facilities, the Yoko Ono Lennon Centre will house an iteration of Yoko Ono Lennon’s famous Wish Tree installation in the Peace Atrium, and the Fröhlich Café Bar will be open to the public.

“We are extremely grateful to the alumni, donors and friends who have supported the University’s fundraising campaign to bring this new cultural landmark to the city.

“We are thrilled to be welcoming people to the Yoko Ono Lennon Centre and The Tung Auditorium.”