The projects at Paddington Central, formerly the site of a now relocated secondary school, include a 221 bed Novotel hotel with a value of circa £40 million which Ryder Architecture has now submitted its plans.

Located on the corner plot facing the New Royal Hospital and university campus, the hotel will be in a prominent position, with key frontage onto both Grove Street and Mount Vernon Road. The thirteen-storey, four-star hotel will be franchised under the Accor Novotel brand and operated by Legacy Hotels & Resorts, comprising both short and long stay suites.

The application also includes plans to include three flexible meeting spaces, a co-working space, a gym and addition to public realm. The food and beverage amenities will include a restaurant, bar and coffee bar and a roof terrace.

Additionally, the planning application for a multi-storey car park with a combined heat and power (CHP) energy centre located on the ground floor has been resubmitted by architects KKA. The building is to be located on the Elm Grove site within Paddington Village Central, currently occupied by residential properties, which have been purchased by the city council and will be demolished as part of preparatory works for the site.

Although the initial plans were approved last year, a subsequent analysis has revealed that a larger capacity for the car park is needed to meet the requirements of the educational, residential, medical research and commercial developments that will populate Paddington Village, as identified following discussions with leading institutions in the KQ undertaken by Liverpool City Council.

The revised car park design has seen the facility increase from eight storeys to 12, enlarging the capacity from 1,088 to 1,245 bays, with their size having also been increased. The car park will comprise a combination of standard and accessible bays, as well as 12 electric vehicle recharging bays with capacity to increase this number in the future. The building will also offer parking for cycles and motorcycles and a Facilities Manager’s office has also been incorporated, offering active frontage to the building on Smithdown Road.

The size and accommodation requirements of the energy centre have been refined by specialist consultants Vital Energi, also based upon a revised analysis of the developments within Paddington Village. The centre will now sit on the ground floor of the car park and be accessed from Smithdown Lane.

The District Heating Network will deliver a sustainable power and heating source for Paddington Village, with district heating regarded as the lowest carbon footprint of all fossil fuel burning energy systems.

Mayor of Liverpool Joe Anderson said: “This new hotel and the car park and energy centre are all vital to the completion of our Paddington Village site. They are crucial pieces of infrastructure needed to support all the amazing businesses that are flocking to this game-changing development. The city council is delighted with the progress to date and we are already looking at the next phases of expansion and how we can attract more high-quality companies and jobs to the city.”

Barry Roberts, managing director, Morgan Sindall Construction, North West, said: “This is a milestone moment for Paddington Village. The revised plans for the car park reflect the requirement that the development is set to have higher levels of interest and popularity than previously anticipated, partly driven by the excellent standard of building the area will boast – as evidenced by the plans for the hotel. Our presence on such a transformative project for Liverpool reflects Morgan Sindall Construction’s status as a reliable contractor able to deliver complex projects efficiently while delivering added value for the communities we work in.”

Mark Roberts, director of KKA Architecture said: “As passionate promoters of all that is good about our great city, KKA is proud to be involved with Liverpool City Council and Morgan Sindall Construction in the Paddington Village/Knowledge Quarter development. The prestigious and significant nature of the development has been instrumental in formulating design opportunities. The design proposals for the MSCP and energy centre reference the proximity of the Williamsons Tunnels with their important local heritage implications in the creation of a coherent and relevant architectural statement.”

Gareth Callen, partner at Ryder Architecture said: “The team is delighted that the next phases at Paddington Village have been submitted for planning approval.  The hotel will be a distinctive and attractive focal point on the prominent corner of Paddington Village and provides an unforgettable gateway into the city.  The hotel, as principal building on Paddington Village Central, will sit comfortably with the massing and scale of its neighbours and within the wider public realm setting. Ryder’s role in coordinating the setting, masterplan context and planning consultant on other key developments on the Paddington Village site continues with successful collaborations with design, contractor and client teams.”

Morgan Sindall Construction’s other projects at Paddington Village Central include the design and build of the new £35 million northern headquarters of the Royal College of Physicians, The Spine, set for completion in 2020.

For more information about this news release please contact Tom Carlin at Influential on 0161 804 1400 or email carlin@thisisinfluential.com. 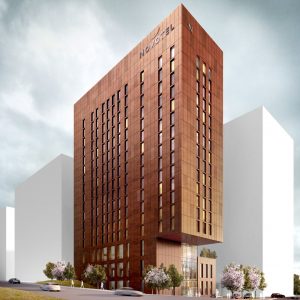