The team at LJMU Face Lab have created a ground-breaking new animated facial reconstruction of Robert Burns reciting one of his own poems in collaboration with the Scots poet Rab Wilson, the University of Dundee and Dimensional Imaging (DI4D) in Glasgow.

Robert Burns is one of the most famous characters in Scottish Cultural History, with his life and work celebrated each year on Burns Night (January 25).

It is the first time the Face Lab team have worked collectively to produce a real-life animation of one of their facial reconstructions.

The techniques used have the potential to transform the way we interact with history creating living portraits, sculptures and avatars of famous historical figures.

The initial work began in 2010 when Scottish poet and Robert Burns fan Rab Wilson teamed up with Professor of Craniofacial Identification Caroline Wilkinson to depict the living face of Robert Burns.

Face Lab at LJMU revisited this facial depiction in 2016 and recreated his face using the latest 3D digital technology from a partial cast of his skull, along with Burns documentation, portraits, silhouettes and written descriptions.

Rab Wilson was recorded reciting Burns’ poem ‘To a Mouse’ using DI4D’s Facial Motion Capture System at the 3D Visualisation Unit in the University of Dundee. In collaboration with DI4D, Rab’s facial animation was tracked and then transferred to the 3D digital model of Robert Burns. Rab’s voice was then added to the final animation. This process required specialist animation skills, facial expression knowledge, craniofacial expertise and the latest digital, CGI and motion capture technology. 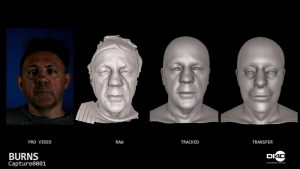 Director of LJMU Face Lab Professor Caroline Wilkinson said: “This real-life animation of Robert Burns has brought the poetry of this Scots Bard back to life for generations to come. It will help to promote Scottish culture and to visualise his charismatic and creative personality.

“To see Burns reciting his own poetry was a remarkable moment.”

She added: “Face Lab’s facial animation research is important as there is potential to apply facial animation techniques to animate faces of people from the past produced via facial reconstruction from human remains.

“In the future you may be able to interact with people from history digitally, listen to them speak, recite literature or guide you around a museum exhibit as a virtual avatar.

“There is potential to animate other high profile historical facial depictions including William Shakespeare, St Nicholas, King Richard III or Robert the Bruce.”